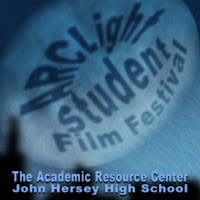 The ARCLight Film Festival is open to all high school students.

The festival will feature screenings of selected films. Awards will be given in several categories after being judged by a panel of professionals. An Audience Choice Award will be presented to the film voted on by festival attendees.

Students whose films have been selected will be encouraged to attend and speak if they have won an award.
Why ARCLight?

Yes, there is a cinema company called Arclight Films. No relation. Why did we choose this name for our student film festival?
Well, first of all, the festival is hosted now by the Academic Resource Center (aka the "ARC") at John Hersey High School.  In the Fall of 2020, the ARC began hosting a podcast called the ARCLight Podcast, plus a film series called -- you guessed it --- the ARCLight Film Series. Adding this film festival and calling it the "ARCLight Student Film Festival" seemed a no-brainer.
But an arc light is a great metaphor for what it is we do.
They were truly the first real form of electric light before the carbon filament light bulb. Arc lights were bright and powerful. Several cities installed arc lights to light up city streets. They were used in lighthouses and the first every movie projectors.  The first iteration of the bat-signal was undoubtedly powered by an arc light.
This festival is devoted to "shining the light" on student creativity from all over the world.
And what better way to do that than with an arc light?
More about arc lights can be read on the Hersey ARC blog.