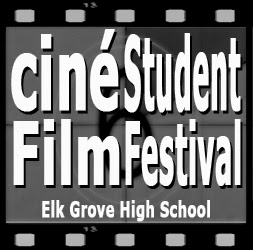 Lights! Camera! Action!  Introducing the CinéStudent Film Festival, hosted by the EGHS Film Club.   The CinéStudent Film Festival is an annual film festival dedicated to honoring the creativity of student filmmakers in digital media. The festival will be held in May at Elk Grove High School, featuring submissions in any category of video production, from narrative films to documentaries, music videos to animation.

Currently, the festival is open to Elk Grove, Prospect and Hersey students.

The festival will feature screenings of selected films and a “Red Carpet” event highlighting the Finalists of the festival.  Monetary and/or filmmaking-related awards will be given for Best of Show to be judged by a panel of local professionals, and an Audience Choice Award to be presented to the film voted on by festival attendees.  Additional prizes may be awarded for Best Cinematography, Best Directing and Best Editing.

Students whose films have been selected will be encouraged to attend.  There will be an exclusive reception held before the evening “Red Carpet Event” so that student filmmakers can mingle and socialize before the event.  This event will be by invitation only.
Posted by Bruce Janu at 5:23 PM