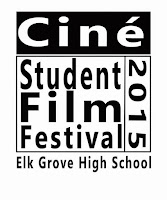 Below is a list of films for this year's CSFF with the name of the student who submitted the film. All of these films are currently being judged and the following awards will be given at the festival.

Plus, the audience will decide on their favorite film as well.  The film with the most votes at the festival will receive the 2015 Audience Award ($50)

1967 Ben Jaeger and Nic Baggetto
Seventeen years after World War III, two survivors in the wastes of what was once America struggle with each other mentally and physically as their separate ideals of their worlds clash.

48 Hours Nicholas Filca
Samuel Brooks is a detective working for Deerlake Police Department where a particular case pushes him to his limits.

The Car Scene Matt Pulli
Showing you the passion of all the car guys at different car meets and what the car scene is all about in Illinois.

The Conspiracy Alexander Saettone
In this satirical mockumentary, four men are interviewed and each give their input on four different "conspiracies" involving America and the government.

The Fourth Wall Garrett Strother
An eager narrator puts his own spin on a traditional boy meets girl story.

Love Only Exists in Our Dreams Kelly Warner
A boy falls asleep in one of his classes and dreams of a girl he has a huge crush on.

Just Smile Alex Chrisos
Five teenagers from different backgrounds reveal their stories and give a glimpse of their lives.

Life Ayush Vora
This is an inspirational film to demonstrate that there can be ups and downs in life.

Lost Footage Zach Hittie
Footage has been recovered by police while searching for a missing person. The person was last seen surveying a possible spot to film a horror movie when things got very out of hand very quickly.

Tap Water Tom Sulima
Many individuals feel safest at home. However, many forget that even their own home is a habitat for unfortunate events. In "Tap Water," a son and his father learn that death itself can lurk even in the most unexpected location: the faucet.

Unlabeled Jolina May Jaurigue
Henrietta has spent years hiding her true self in order to please others. Now, she wants to prove that she can also change her sister, Chica. Will Chica learn from Henrietta, or will Henrietta learn from Chica?


Posted by Hersey ARC and Storytelling Center at 10:39 AM